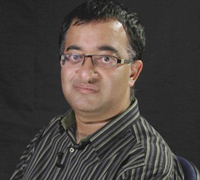 Feisal Malik is a Kenyan Filmmaker who is producing a film entitled “Kenya’s Bloody Railway” which tells the story of the building of the East African railway, when many Indian workers lost their lives, sacrificing blood to bring colonial ambitions to life by building the railway line designed to extract raw material from Africa’s interior more easily out to the British Empires manufacturing industries. Over 100 years later, the old railway is to be rebuilt by the Chinese, leading the filmmaker to ask “What will be stolen from Africa this time around?