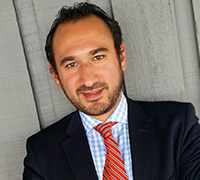 C. Karim Chrobog is an award winning documentary filmmaker. His debut film War Child chronicles the life story of Emmanuel Jal, a former South Sudanese child soldier turned international hiphop star. War Child premiered at the Berlin International Film Festival in 2008, and is the winner of over a dozen international film festival awards including the Tribeca Audience Choice Award, the Crystal Heart Award and the ABC News Source Video Awards. Over the last decade, Karim has directed and produced documentaries and news pieces across the globe on a diverse set of issues. This year, he produced Her Aim is True, a feature documentary on Jini Dellaccio, the first female rock-and-roll photographer. For Al Jazeera America, Karim produced The Other America, a series on poverty in America, and for the Mental Health Channel, Karim completed a two-part documentary on mental health in the US. In his last work, Wasted, Karim explores global food waste in collaboration with the Pulitzer Center on Crisis Reporting.

Karim holds a degree in Foreign Service and an Honors Certificate in International Business Diplomacy from the Georgetown University’s School of Foreign Service, as well as MBA from ESADE (Spain), and International Masters in Business from Georgetown and FGV (Brazil). Karim is half German, half Egyptian and has lived in Singapore, Brussels, Bonn, Berlin and Dubai. He currently resides in Washington, DC.

Follow the link to get an A class speech writing service online.