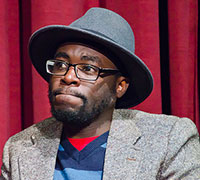 Bill Sellanga, otherwise known as ‘Blinky Bill’ or ‘Doctor Boom’is a part of the group Just A Band as a producer and songwriter. He has been making music for seven years now and is the voice behind the popular JAB single ‘Ha-He’ that gave Kenya it’s first viral sensation ‘Makmende’ amongst other songs. He has also just started scoring for film and documentaries and you can hear some of his creations on the new Juliani documentary
‘Connections’.