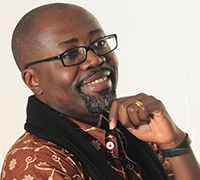 The courage to “speak to power” is a hard challenge for many citizens, and yet the political satirist Gado has made it his career for over 20 years. He is the most Syndicated Political/Editorial cartoonist in East and Central Africa and his drawings are featured in Kenya’s largest selling newspaper the Daily Nation. He has also produced Africa’s first ever puppet political satire series “The XYZ Show” and The Nigerian counterpart of the series “Ogas at the Top” which pokes fun at politicians and the elites. His work challenges us not to waste our agency as conscious citizens of this world. Gado is a 2007 Prince Claus Laureate. He is also a winner of Kenya National Human Rights Commission
Award in Journalism in 2005 and 2007. In 1999 he was named Kenya Cartoonist of the Year.

In 2011 Gado was among 12 extraordinary leaders to receive a Visionaries Award from Ford Foundation for their innovative efforts on the front-lines of key social issues and offer clear and concrete pathways to improved economic opportunities and expanded political and social participation for millions of marginalized people worldwide.