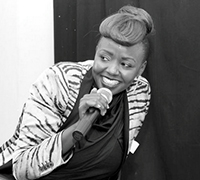 Muthoni is one of East Africa’s finest singers, songwritters, flow poets and percussionists. Since 2007, Muthoni has been performing a blend of Afro-based sounds combined with elements of Jazz and Poetry to create a uniquely entertaining sound. Her debut album “Mambo Bado” was well received and has seen Muthoni become a greatly sought-after performer in various forums, including international festivals such as Sauti za Busara 2008, East meets South Jazz festival 2009 and Selam Music festival (Addis 2009). Her music is a thought-provoking exploration of themes common to the African urban youth such as politics, relationships and spirituality.